When a cloth is used as as second skin in front of a wall of a building the biggest limitation is wind load. For sure when the cloth is placed more than 10-15 cm in front of the facade and above 10-20 m above street level the loads are heavy. In this case single tensioning of the cloth is not enough, especially for permanent constructions. 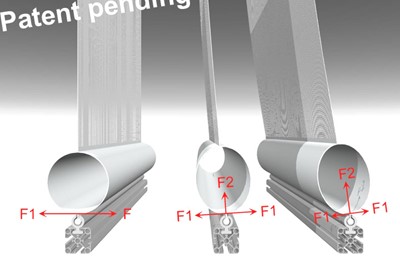 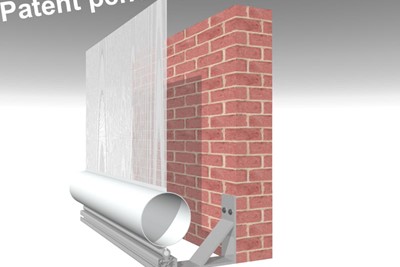 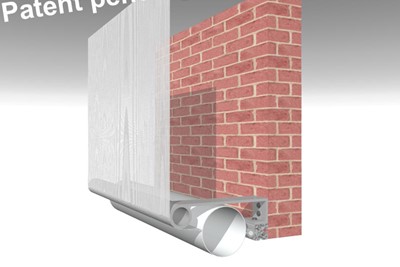 These heavy loads can be reduced by giving some elasticity to the fabric which allows some space for deformation. In reality this happens by fixing the fabric to springs or by providing it with an edge that is tensed with an elastic string and eyes.

Those systems have disadvantages and limitations. For example the elastic strings can be damaged and need to be replaced. A flexible tensioning tube with spring mechanisme must be changed even after periodical maintenance to assure permanent flexibility over a long period of time. The maintenance of tensioning tubes, springs or cables is in places difficult to reach. In case of tensioning by springs or cables there always remains space between the end of the fabric and the attacement points of the cable or spring. Those elements also remain visible which is not always desirable. After all (an aluminium) tensioning tube is rigid and not flexible, and this is why there are situations where it is difficult to maintain equilibrated charges in the whole fabric. When a strip of fabric is tensed on the entire facade width, the wind load that apply to the center of the fabric differ from the load at the edges. In case of a single or fragmented (aluminium) tensioning tube it is difficult to properly distribute the forces in the fabric.

The fabric is connected to an inflable tube through sealing aor a cable profile (see figure 2). Pressurizing the tube tensions the fabric in a flexible way. In case of load on the fabric the tube acts as a flexible spring (tube becomes oval). Overall applied tension in the cloth is dependant of the diameter of the tube and applied pressure in the tube. When the wind load is released the cloth reveals its original position. The inflatable tubes are pressurized by a simple air pressure system.

The inflatable tensioning tube has a number of advantages. The tubes require no maintenance, only the air compressor system needs maintenance. More architectural degrees of freedom; the tubes can be placed invisble from outside (see fiure 3). The tubes can be place below or above the facade covering. Also the ratio between diameter, pressure and maximum movement of the cloth can be chosen. The inflatable tube creates a more even distribution of forces trooughout the cloth. Controlling the pressure differently in various tubes enables full control of the distribution of loads on large size facade coverings. When the cloth is applied in a sliding curtain system the tubes are simply deflated when sliding is performed.

In summary the advantages:

Applications are not limited to facade coverings. Other applications are: Tensioned ceilings, advertising panels, tent constructions and even a trampoline is made using this system.