The project "rigidizing the skin" was intiated beginning of 2003 by the faculty of architecture of the TU Eindhoven. It consisted of a technique that allowed the realization of blob shapes in a building. The project concerned a design competition between several groups of students, each supervised by an artist. The assignement was the development of a pavilion for exhibitions on the terrain of the TUE itself.

At the end of July, one of the designs was selected by a jury (see pictures below) in order to be actually realized. This was possible trough the cooperation of different production and engineering companies each having it's specific expertise to realize this unusual project. 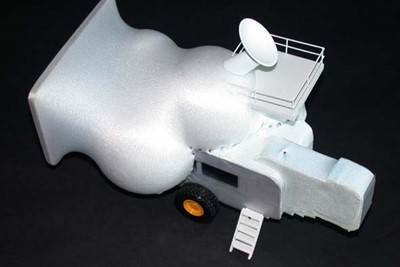 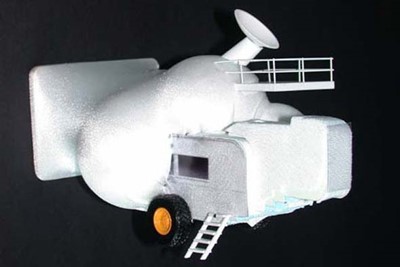 Buitink Technology applied for this project for it's expertise in technical fabrics and inflatable structures as well as for the above mentioned technique "rigidizing the skin". This technique was used for the lightweight bow of the theatre cover in Soest.

"Rigidizing the skin" is a technique where the inflatable moulds are covered with fibre glass sheets painted with (for example) polyester resin. Through this method, after hardening of the resin, the structure becomes a stand alone polyester skin. The strenght of the obtained rigid structure depends on the used fabric and the number of resin layers. After hardening the inflatable structure is emptied and removed and a polyester blob is made.

The pavilion consists of a combination of a caravan ( that shall also serve as mould for the final polyester skin) with a blob that comes in interaction with it in a specific position. The pavilion is designed to bring exhibition space in two ways: horizontally with a projection screen on the flat side and vertically where the flat side is positioned on the ground and creates a high space.

The artist Jurgen Beij, resposible for the final design, was also involved in the realization.